Posted on 5th October 1917 by GrahamC

Fred was born in Ruskington, Lincolnshire, in the September quarter 1896, the son of John Charles (Horseman on Farm) and Ruth (née Ward) Whitton. The 1901 Census (RG 13/3048) shows that Fred had an older brother, William, a younger brother, Arthur, and a younger sister, Sarah Elizabeth. The family was living at ‘Westcliff’, Ruskington.

By 1911 (Census RG 14/19618) Fred’s parents had moved to High Street North, Ruskington, with Sarah Elizabeth and Arthur. However, there is no obvious record of Fred on that Census.

[N.B. Fred’s older brother, Pt. 10007 William Whitton, enlisted in the 3rd Battalion, Lincolnshire Regiment, on 14 November 1914. He was trained at Grimsby and was posted to France in April 1915.

After being wounded he was sent to Belfast to recuperate and as at 27 November 1915, according to ‘The Lincolnshire Chronicle’, he was recuperating in Kingsholme.]

Before the end of the War, however, Fred’s mother, Ruth, died, in April 1917. She was buried on the 7th in Ruskington Cemetery, Old Plot, Section A, Grave 273. Father, John Charles, lived another 40 years and was 90 when he died on 16 June 1967. He was buried in Sleaford Cemetery.

Fred enlisted at Sleaford, Lincolnshire and unfortunately his Service Record has been lost. However, his Medal Index Card (MIC) shows that he was not in receipt of the 1914-15 Star medal, meaning he did not enter the War abroad until after the end of 1915.

The reference to Fred being enlisted in the North Staffs Regiment only appears on SDGW database, i.e. not on his MIC, nor is any Battalion named, so it is likely that shortly after enlistment he was posted to the Manchester Regiment.

The 11th (Service) Battalion was formed at Ashton-under-Lyne in August 1914 as part of K1 (Kitchener’s First New Army) and came under orders of 34th Brigade, 11th (Northern) Division. The Battalion moved in April 1915 to Witley Camp, near Godalming, Surrey. On 30 June 1915 the Division sailed from Liverpool, going via Mudros and on to Suvla Bay, Gallipoli, disembarking on 6 August 1915. In December 1915 the Battalion was evacuated from Gallipoli and moved to Egypt via Imbros, and in July 1916 returned to France. 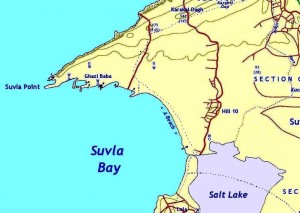 During the Gallipoli campaign the 11th Battalions lost 177 Officers and men killed or died of wounds (CWGC Records), 42 on 7 August, the day after they landed, when the Battalion attacked Lala Baba. 24 more were lost on 19 August.

[A full account of the Battalion’s actions in Gallipoli and Egypt can be read on the website named in Sources below.]

There is, however, no indication that Fred had joined the Regiment in Gallipoli and most likely was posted as a replacement on its return to France. During the various Battles of the Somme Fred’s Battalion suffered a further 155 Officers and men killed in action or died from wounds received. [CWGC Records]

Eighty-four of these casualties came in the last week of September 1916 when an attack was made on Zollern Redoubt.

The War Diary reported that : “The operations of 26th to the 30th September 1916 had cost the battalion 309 casualties and, at some point over these five days Fred Latham performed an act of bravery sufficient to warrant his award of the Military Medal. ”

[Again full details of this action can be read on the website named in Sources below.]

The 11th Manchesters were part of the 11th (Northern) Division (circled)

On 31 July 1917 The Third Battle of Ypres (Passchendaele) began and one of its phases was The Battle of Poelcappelle. It was in the preparation for this action that Fred lost his life.

Fred was one of 14 men of the 11th Battalion killed on 5 October 1917. Six others, like him, have no known grave and are Commemorated on the Tyne Cot Memorial.

The day, before Fred was killed the 11th Battalion were near Poelcappelle.

From the unpublished history: “ On 4th October, the 11th Division, supported by ten tanks of ‘D’ Battalion, advanced from their position south-west of the village up the gradual slope of Poelcappelle spur. Machine-gun fire from enemy strongpoints swept the area causing many casualties. The men pressed on, greatly assisted by the tanks and units of the 34th and 33rd Brigades entered the village of Poelcappelle, including the 11th Manchesters. Their objective was the western half of the village which was attained, while the tanks pressed on, driving the enemy garrisons from the rest of the village. ”

It is difficult to say whether Fred was killed on 4th or 5th October, but it’s safe to say that he in action during the capture of Poelcappelle at the time a V.C. was won.

During the advance 29-year old Sergeant 4926 Charles Harry Coverdale of the 11th Manchesters (later 2/Lieutenant) received the highest and most prestigious British award for gallantry in the face of the enemy, the Victoria Cross.

As stated above Fred was one of 14 men of the 11th Battalion killed on the 5th October 1917. Six others, like him, have no known grave and are Commemorated on the Tyne Cot Memorial.

On the 3 November 1917 ‘The Lincolnshire Chronicle’ published this tribute to Fred: “MUFFLED PEAL – On Sunday morning a muffled peal was rung on the Church bells in honour of the memory of Ptes. Fred Whitton and Arthur Wainer, who had recently been killed in action.”

This entry was posted in Manchester Regiment, Private, Tyne Cot Memorial and tagged Killed in Action. Bookmark the permalink.